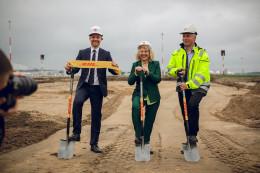 With the symbolic first shovel, on Wednesday, 10 June, the construction of the regional complex of DHL was started at Riga Airport. The centre will be among the most advanced express shipment handling and logistics centres in Baltics.

The agreements provide that in cooperation between the Airport, logistics company “DHL Latvia” and real estate development and construction company SIA “Castor Construction”, a regional DHL shipment processing and logistics centre in an area of 4 500 square metres will be built at Riga Airport during the year. The total planned investments account for EUR 12 million.

Artūrs Saveļjevs, Member of the Board of Riga Airport: “The new DHL cargo logistics centre will ensure stable long-term air cargo flow at Riga Airport. This will strengthen the position of Riga Airport regional air traffic hub not only in passenger, but also in cargo traffic. The development of the cargo segment is particularly important for the Airport at a time when passenger traffic has been significantly affected by the Covid-19 crisis. The main and decisive role in attracting and developing international cargo logistics solutions at Riga Airport is the low-cost infrastructure, the high quality of services, clear and simple customs procedures, as well as added value that through innovations can be created by cargo companies and regulatory authorities. The main task of the Airport is to provide an appropriate infrastructure and a favourable platform for cooperation, which will facilitate the entry of new cargo carriers and increase the turnover of air cargo.”

DHL Express will move to the new terminal at Riga Airport and will have a new sorting facility that will allow for more efficient shipment handling, thus ensuring faster and more convenient delivery of shipments to its customers.

Snezhina Kazakova, Managing Director of DHL Express: “Riga is the economic centre of Latvia, and Riga Airport is the largest airport in Latvia. DHL Latvia is focusing on the Express business of our Global company DPDHL, so we are closely involved in air transport and we need to be at the airport to serve our customers as quickly as possible. By being located in the territory of Riga Airport, using the new automated shipment sorting system and efficiently reorganizing our processes, will allow us to deliver shipments to our customers as early as possible and to pick up shipments from them as late as possible. Therefore they can use efficiently almost a full working day to produce/process what they need to send out and have it delivered by next day in all most important places in the world for them”.

Jānis Milzarājs, Member of the Board, “Castor construction”: “The development project started by “Castor Construction” has resulted into construction stage now and within one year the tailormade terminal with office building will be handed over to “DHL Latvia”. This is an important project not only for “Castor Construction” but also for “DHL Latvia” and Riga Airport, what despite of difficult economic situation in the world didn’t hesitate to support the common target to build the terminal. This is a good moment to support economy of Latvia and it can be performed due to attracted investments from Finland and SEB Bank financing.”

As reported before, as the aerodrome infrastructure at Riga Airport continues to develop, a new cargo apron will be completed this summer, which will allow Riga Airport to double its cargo handling capacity and make Riga Airport more attractive to air cargo carriers from all over the world. The new apron will feature three large-fuselage aircraft piers with a flexible layout that will allow accommodating all types of cargo aircraft. Thus, together with the new DHL shipment processing centre and the planned multifunctional logistics centre, the Airport will have a state-of-the-art cargo handling infrastructure, allowing Riga Airport to fully participate in the global air cargo market.

Currently, the volume of air cargos in Latvia consists of four business lines: export and import of high value-added goods, mail and e-commerce, air cargo transit and non-military cargo transit to Afghanistan for the needs of the International Security Assistance Force (ISAF).

Riga Airport is a fast-growing Northern European air traffic hub. The 20 airlines operating at Riga Airport offer more than 70 destinations in the winter season and more than 100 in the summer season. In 2018, Riga Airport handled over 7 million passengers - nearly a half of the entire Baltic air passenger traffic.

DHL Express is part of the Deutsche Post DHL group and is the world's leading logistics and international courier company. DHL Express routes cover a total of 220 countries and territories with more than 120 000 destinations worldwide.