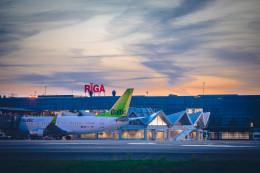 Preliminary data on Airport performance in the first seven months of this year show that in July, Riga Airport handled half as many passengers as a month before.

In July, the Airport served 297.2 thousand passengers, which is almost 140 thousand more than a month before. Consequently, the number of passengers in July has reached 36% of the 2019 indicators.

Almost 703 thousand passengers were handled at Riga Airport in the first seven months of 2021, and the number of passengers is still 84% lower than in the pre-Covid-19 crisis period.

Of the total number of passengers, 60.5% were carried by the national airline airBaltic, 18.2% – by the Irish low-cost airline Ryanair, and 6% – by the Hungarian low-cost airline WizzAir. A total of 12 passenger carriers currently offer flights from Riga Airport.

As airlines expand their operations at Riga Airport, the route network is also expanding – this week, it is possible to travel from Riga to 86 destinations.

Riga Airport is a rapidly growing air traffic hub in the Northern Europe which connects the Baltic States with the European business centres and popular recreation destinations. As a participating organisation of the Charter for COVID-19 of the European Union Aviation Safety Agency (EASA), Riga Airport applies the highest epidemiological safety standards for work in the aviation sector. Skytrax has awarded Riga Airport with four stars for the implemented Covid-19 safety measures.